Eight is the infinity number.
It is the lemniscate.
The lucky number in China and Japan.
The spiritual Eight Day, because the number 7 refers to the days of the week.
The number of wealth and abundance in Hinduism.
The power of two being 23 (two cubed), and the first number of the form p3, p being an integer greater than 1 in mathematics.
In the Middle Ages eight was the number of “unmoving” stars in the sky, and symbolized the perfection of incoming planetary energy.
In my world eight is the years we’ve been married today.
One year after our seven-year-itch.
One year more of getting older and wiser together, maybe indefinet.

Eight years ago we got married under an old oak tree in Belgium and the actual ritual of marriage, the gravity of the union of male and female, made me realize how deeply humane it is. How at that point we stood in a line of trillions of other humans who went before us. How it was older than anything we could grasp, more human than anything we knew. The ritual goes where words cannot enter.

People who are accustomed with ritual know this about ritual. They know it can connect and relief in a way not other procedure or story can. That’s its purpose, that’s why humans have been performing rituals as long as they have been on this planet. To heal what cannot be touched or spoken about.

We longed to get married after we were together for just six months. After T proposed to me we were over the moon, but the next day we were terrified. We were longing for something we did not understand with our minds. Sometimes our soul communicates things that the body translates as need, or want, or absence. That’s when we turn to ritual, to respond to the call of the soul.

We did not know what we were doing, only that there was nothing we wanted harder than to get married. So eight months later, after three weeks of cold rain, it was suddenly a hot summer day, we stood under an oak tree and people were sitting on hay bales, stepping in cow dung, drinking wine and laughing. Nobody knew what was exactly going on, but for some 120 humans on that summer night eight lucky years ago, it was real, it was happening, it was healing, it was sunny, it was happy, it was ritual. 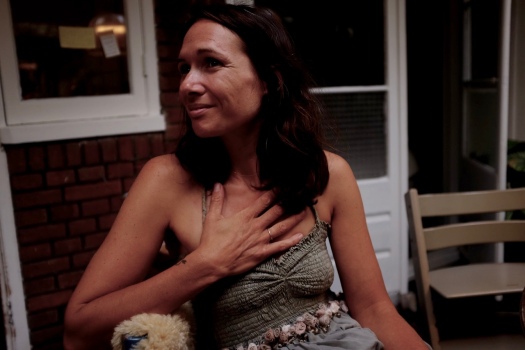 To celebrate we put on our wedding clothes, ate homemade pizza in our garden and did a little ceremony with the children who were over the moon with so much love and festivity.